You are here: Home / Archives for Iraq 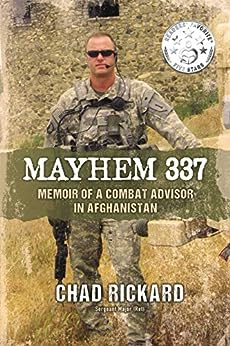 END_OF_DOCUMENT_TOKEN_TO_BE_REPLACED

Chad Rickard was a decorated, multi-tour Iraq War veteran with hundreds of combat missions under his belt. He was a seasoned infantryman with a desire to join the fight in Afghanistan against Taliban and Al Qaeda forces bent on keeping American influence out of the region. In 2008 the opportunity arose to deploy as an infantry advisor to the Afghan Army and he seized the chance. After months of intensive training he embedded with an Afghan Army Infantry Battalion in Khost, Afghanistan. There he began a fierce and deadly nine-month fight against Haqqani Taliban along the Pakistan border of Eastern Afghanistan. His gripping memoir guides you through intense mountain warfare from an austere outpost as well as street to street fighting and hostage situations in downtown Khost City. This skillfully written, award winning memoir, is one you are sure to enjoy as Rickard shares the thrill of victory and the agony of losing men in battle.