On April 5, 1981, two college coeds were kidnapped from a residential street of Albuquerque, New Mexico. The next morning, the girls were found in a desolate mountain arroyo; one raped and murdered, the other savagely stabbed 33 times and left for dead. As fear engulfed the University of New Mexico’s quiet campus, police had few clues to assist them in tracking down the vicious killer.
`
This book is based on the true story of what happened that night in the Sandia Mountains, a shockingly brutal crime that changed the city of Albuquerque forever. It is a gritty tale of unspeakable violence and the relentless search for justice, but it is also the story of a young woman’s incredible will to live . . . and her life-long struggle to escape the legacy of that deadly arroyo.

Joyce Nance, award winning documentarian, video editor, Albuquerque Sports News publisher, and paralegal at the Public Defenders Office, has written her first book. Although she already has a degree in accounting, she is currently pursuing a second degree in Criminal Justice and working on her next book.
Originally from California, she now lives in the Albuquerque, New Mexico area.

In the summer of 1980, a maverick young doctor gave it all up, to hitchhike around the world.

The first part of his odyssey took him through South America and up through Africa, accompanied by his mythical hunter companion, Orion.

His vision quest continued around the second cartwheel of the European Grand Tour.

In Hind Cartwheel, blessed by the living goddess on his thirtieth birthday, he spins the dharma wheel of the Indian subcontinent.

Lawrence Winkler is an ancient physician and phenomenologist, traveler, mushroom forager, and amateur naturalist. As a young man, he hitchhiked around the world, for five transformative years.
His middle age is morphing from medicine to manuscript. He has a passion for habitat protection, including the (hopefully) final repairs on a leaky roof. Westwood Lake Chronicles was his first book.
He lives on Vancouver Island with Robyn and Shiva, tending their garden and vineyard, and dreams.

What Inspired You to Write Your Book?
Hitchhiking around the world.

Victoria Aldridge Washuk published her great grandmother Ruby Alice Side Thompson’s World War ll Diaries. They are an unfiltered account of the destruction and the quality of life during the London Blitz. It is a fascinating ,compelling and dark story of an unhappy marriage, social conventions, and personal loss.
Ruby Alice Side Thompson was born in England in 1884. Ruby grew up during a time when education was just beginning to be encouraged for both upper and middle class women. Women were seeking new opportunities and equality. During the late 1890′s, Ruby explored many radical political ideas of London, England. She met many famous people including the writers George Bernard Shaw and William Butler Yeats. The moth and the star: a biography of Virginia Woolf was written by Ruby’s sister Aileen Pippett. Ruby loved to read and always dreamed of writing famous novels. Ruby was not able to express her opinions or feelings about either the war or her unsatisfactory marriage to Ted, except in the privacy of her diary. Being able to do so was her saving grace. Many of the things she says in today’s world would be considered politically incorrect.

The ideal reader is someone interested in World War ll history, British history in particular, also any one who would like to learn about the ordinary citizen surviving a bombing blitz and living day to day under horrific circumstances. Also these diaries appeal to feminists, educators and women’s study groups as my great grandmother Ruby was very forward thinking for her time.

I inherited a set of 43 diaries that span from 1909 – 1969. They were given to my grandmother Ruth Ferris Thompson and she passed the journals and all rights to publish down to me.

I started re-reading the World War ll journals and found them extremely worthy of note on many levels. I realized how little I knew about the events surrounding World War ll and what the Londoner’s in particular had to endure. These journals are a combination of the historical and the exceptionally personal.

What Inspired You to Write Your Book?
I did not write the diaries but I published them on Create Space to share with the world. I think World War ll and the effects it had on ordinary citizens, as well as the horrors that occurred should never be forgotten. 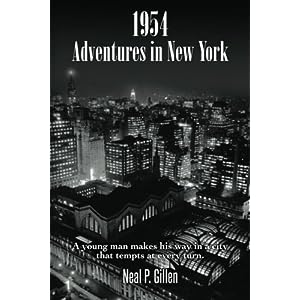 What inspired you to write your memoir?
1954 was a pivitol year in my life that began at a low point a few weeks after being released from jail for joy riding. I finished high school, entered the work force and began to become aware of what I had been and what I could be. With the encouragement of others I began to turn my life around.

As the years passed old friends urged me to tell my story and that of the friends who shared this year with me.

About your Book:
A young man makes his way in a city that tempts at every turn as he and his friends come of age at a different time in a vibrant city.

A story filled with the twists and turns of a teenager becoming a young man in New York City in the ‘50’s has all the makings of impact fiction, except it is true. F. Scott Fitzgerald said “anything was possible” in New York, and it was for this young man.

How did you decide how to publish your book and where is it published through:
I decided to share this story to an audience beyond my immediate friends based on the positive response I received while workshopping various chapters of the book at The Writers’ Center.

Createspace is the publisher.

How do you see writing a Memoir as different from writing other genres of books?
A memoir is far more difficult because it requires you to reveal yourself, your feelings and emotions about yourself and others. Digging inside yourself to do that is difficult as you are concerned about how others will perceive you. Whether you have you depicted others and events accurately is also a sensitive issue that must be resolved. It is best done by having those involved review the work product to assure you have it right. Overcoming your own sensitivity and guarding that of others is a difficult process. It is also difficult in creating an appropriate arc in telling one’s own story – you must write it as it occurred, not as you would have liked it to occur.

In contrast, writing fiction involves none of those concerns. It is your imagination at work in telling the story to the reader.

As a lawyer he appeared before numerous state and federal courts, including the U.S. Supreme Court, and as a legislative representative he testified before committees of the U.S. Congress, state legislative committees, and foreign parliaments on over one hundred different occasions on a myriad of issues.

Gillen was the longest serving member of the Agricultural Advisory Committee of the Commodity Futures Trading Commission, and was Chairman of the Legal Faculty at the ACSA International Cotton Institute at Rhodes College and the University of Memphis. He was also appointed by the Departments of State and Agriculture to serve as the first U.S. Representative to the Private Sector Advisory Panel of the International Cotton Advisory Committee (ICAC). The State Department has also named him to U.S. delegations to 25 international conferences. Currently, he is the ICAC’s Permanent Representative to the United Nations Committee on International Trade Law (UNCITRAL). In his commercial travels he has visited over 50 foreign countries. The National Cotton Council of America recognized his contributions to the cotton industry in granting him The Harry S. Baker Distinguished Service Award.

Born and raised in New York City, he graduated from New York University following a three & one half year tour in the U.S. Navy where he served with the Naval Security Group on Guam and Okinawa, intercepting Chinese and Russian naval communications, and in Italy and England monitoring the U.S. Navy’s 6th Fleet and NATO Naval Forces. Following his discharge he was an instructor at the Naval Security Group Reserve Detachment in Whitestone, New York.

Gillen received his Juris Doctorate from Georgetown University Law School in Washington, DC where he met and married his wife Mary-Margaret. They are the parents of two daughters, both of whom are lawyers.

Mr. Gillen is also a novelist with nine published works to his credit, Sugar Time, Capitol Punishment, Dinner In Bordeaux, Kitty’s Rules, Slamming The Close, The Night Clerks, Altar Boy, Lonely No More, 1954 Adventures in New York, coming of age memoir. He is currently working on two other manuscripts, The Switch, set in Paris and The Woman on the M Train, which is set in New York.

In conjunction with his literary endeavors he serves on the boards of The American Independent Writers and The Writers Center, where he is the Vice Chairman.

Website(s)
Link To Book On Amazon

What inspired you to write your memoir?
I thought that a sub culture like the outlaw biker world, that is a part of history, might be of interest to someone who would like to know the thoughts of someone who had lived it for over 50 years as he experienced it day to day. Not just a documentary, like most memoirs of this kind.This one is the first of a three part series.After all, 50 years is a long time, especially the way we lived it.

About your Book:
I am pleased with my book. I am told by others who lived the life that they were also. What more could an author want.

How did you decide how to publish your book and where is it published through:
I have a friend, Sharon Smith, who writes an online column Examiner,com about the bikers scene in the Dallas, Tx. area. I sent her a couple of old school biker stories. She had a great response from her readers and suggested i put it in a book. I had written a rough draft already with this in mind but, that got me on the road to actually doing it. Sharon is also my editor. I used a company named “One Book At A Time” to print the book. I decided to self publish as many good books were turned down that went on to be classics. Besides if I ever talk to an agent or whoever, i have a finished book to show them.